by I Saw The Deep 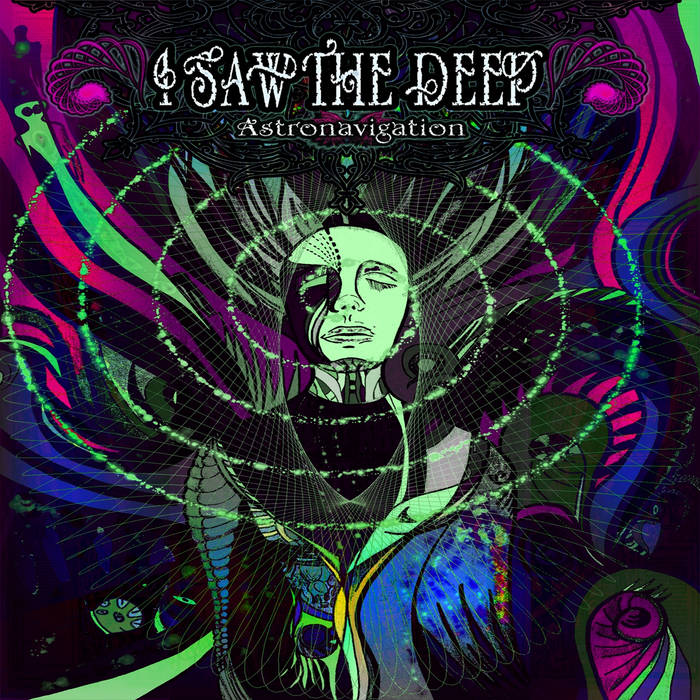 Soshanna ♥ This album satisfies my appetite for heavy hitting hard rock and them some. The gritty, grungy vocals are some of the best Ive heard in awhile. I am digging the attitude this album brings. Favorite track: Of Death And Dying.

"This is a 12 song 60 minute thrill ride which takes you to the vortex of space and beyond."
I Saw The Deep are heavily influenced by Mastodon, TOOL, Baroness and The Mars Volta amongst others. Well these influences shine through on their brilliant and astonishing debut album – “Astronavigation”.
Imagine if all those brilliant bands started jamming together or release an album as a supergroup. Well Astronavigation would be the crazed result. This is jaw-dropping stuff.”
thesludgelord.blogspot.com (UK)

"A singularly entertaining listen"
…if you can hear in your mind something that mixes the heavy riffs of Mastodon, the trance-inducing vocals of Alice in Chains, the mysticism of The Tea Party and the psychedelic sensibilities of early Pink Floyd, you might be on the right track for describing I Saw the Deep. All of that combined in a tight sounding package that does not meander around aimlessly makes for a singularly entertaining listen for this reviewer.”
metaldisciple.com US)

"..I Saw The Deep is incredibly inspiring."
For listeners who do not always want to stay within the walking paths of rock and metal and like to go on a musical journey into the seemingly impenetrable wilderness, I Saw The Deep is definitely recommended.”
rockportaal.nl (NL)

"One man, one mission and one massive album"
The solo project of the of Aruban originating Darrel Lacle is distinct. Heavy rock singer / songwriter Darrell does everything alone. He is a multi-instrumentalist who is inspired by the mysticism and the dark side of the ocean. His music shows influences from bands like The Mars Volta, Led Zeppelin and Mastodon.
– Speaker Magazine (NL)

"A multi-dimensional record"
I Saw The Deep take us on a journey with their debut opus Astronavigation which they hope we won't soon forget. 'They' isn't really the right pronoun though as Darrell Laclé did all the work, including production and artwork. There is a lot to take in and the first door to the universe of this band is showed through the wicked cover of the album: it is as intricate and colourful as the music.
– Metal Storm (International)

"Extreme Deep"
Fat riffs and a really good production for a self-made album. 'Astronavigation' comes with a big spectrum of music styles...you have a lot of metal parts with progressive wings, deep and swampy doom parts mixed with a bit stoner. The nice ballads from master chief Darrell and the spooky parts makes the sound complete. "Map Of Piri Re'is, Of Death And Dying, Oneironaut and Astronavigation" are my favourite songs on this mighty album, enjoy it...because its good for you!
(8/10) – Stonerhead Let Groove Your Brains Tonight (AT)

"It's in the stars."
This is some pretty good sh*t. A bit trippy at times but heavy as f*ck throughout.
– A Distant Rumble (US)

“When diving into the dreams of a peacock we uncovered a higher life form."
I Saw The Deep keeps it real by effectively bearing a homage to 90's/earl 2000's prog acts like The Mars Volta and Tool without adhering to the mythic Clear Channel Checklist a band must embody to receive radio play in North America. Some parts even spark a fleeting nod to Led Zeppelin.
– Orlandooom (US)


"Nice fat spacey and convincing stoner-rock."
The music is rigged with all sorts of breaks, roaring riffs and grooves that keep alternating. It is in yr-face but delivers at the same time something fresh.
I Saw The Deep is obviously a band that knows what they want and bring this in their own wayward ways into effect.
– Popunie (NL)

Inspired by mythology, the paranormal and classic sci-fi, I Saw The Deep crafts a wayward trademark heaviness by morphing cryptic, cinematic story lines into monolithic pillars of sound.

Track Name: Phantom Island
Drowning in a sea of visions
We're sailing towards the edge of reason

Deceived by the dead, by the rules they have written
By fall of night we all will be gone

Call out my name

Sailing to the edge of the world
Track Name: Astronavigation
Searching the horizon for a sign
Gazing at the stars in hopes of salvation

Don't try to save me
You need to save yourself

Don't try to save me
You need to save yourself

Save me from myself
Save me from my own hell
Track Name: Scarlet Skies
I'm standing on the edge of light
Darkness soon to consume me
You've found new ways to lie
But you could not fool me

Goodbye
Track Name: The Djinn
Cold blooded heart
tearing me apart
Figures in the sand
dancing in the wind
Downworlder
Swaying shadows burn
Speak to me, oh sun
Before I turn to dust

Creatures of the night crawling in despair
Shadows on the rise
With sharpened blades came sweet silent..

Strangest flesh divides
Serpent’s mesh invites
Don’t drink from the well
Cursed by ancient spells
Pierced from within
Dagger of the Djinn
Track Name: Oneironaut
I’ve bred the strangest soul along the path of rage, behold
His arms spread like branches on a dead tree
His legs buried deep like roots into the earth
A landscape unfolds before my..

Followed the marks of silver, now turned to gold
The gyroscope signals
There is no hope

Gravity no longer us holds
Hold on

My eyes
How far
Oneironaut
Track Name: Secrets Of The Blue
The great reveal before the fall
Made of steel and standing tall
My mind was tortured, my veins severed

It's the calm that drags me down
The silent blue that tunes me out
I'm not waking up to find my dreams severed
Forget the past, forget me not
Grab my hand, I'm reaching out
No, I won't sink
I'm light as a feather
Track Name: He Who Saw The Deep
Followed the shoreline until night turned to day
And I'm waiting and waiting for you
Wasting the hours given to me by a sage
As I'm wasting and wasting away
Calling the kings and queens by name as I sing
As I sing and I sink as my sorrow crashes in waves
But tomorrow this beauty will fade into a haze
Light gives way to grey

Fall into sleep as I hide in my haven, the shade
Fading and fading away
Current once dormant,
now pulls me into a delayed transmission
I wish for my sorrows to crash into waves
But tomorrow this beauty will fade into a haze
Light gives way to grey

Wasting the hours, surrendered, oblivious today
Fall into the center, I crawl into space again
Magic words you say, ceiling gives way to the sky
Absolving my sin, day gives way to grey
Track Name: Spira Solaris
Secrets and worlds between
revealed in velvet shades
I’ve seen the canvas paint itself
The cry of dawn in red.

In red
In red

Light of fire dictates the dance
The fold inwards begins,
imploding like the stars
Spoken to the ancient sons
of planets left for dead
We were left for dead

I’m seeing red
I see red
I see red
Track Name: Of Death And Dying
Living in an artificial world
All my friends were sucked into the void
Sleep and her half-brother death are home

Lay beside me
Come and take me home

Sleep and her half-brother death are home
No more tales of the living to be told
House of holy ghosts, you will walk alone

Lay beside me
Come and take me home
I am coming home
Track Name: Saturniid (The Visit)
You've come to bring me a message
I wasn't ready to receive
You flew from far, far away
Where no one ever has set foot

I'm gliding through a passage
A narrow glimpse of light
Open the door, open the door
I'll take what's mine and be gone

I Saw The Deep recommends:

Bandcamp Daily  your guide to the world of Bandcamp